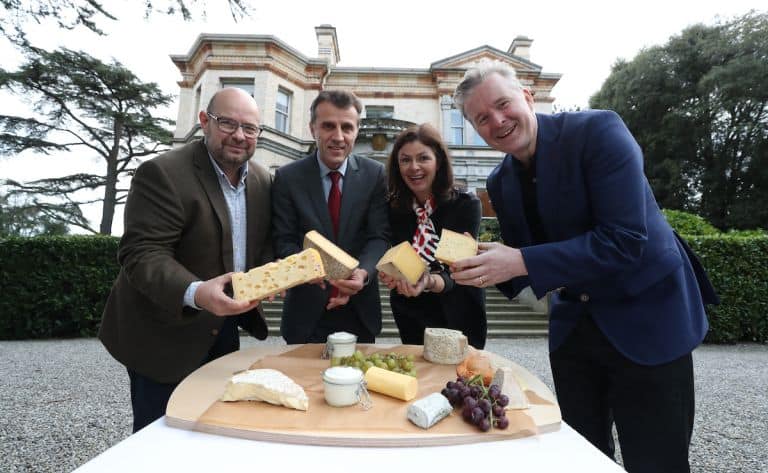 To celebrate this year’s Good France (Gout de France) the French Embassy in Ireland has come together with the French and Irish Dairy Councils and the School of Culinary Arts (DIT) to launch a really exciting competition for culinary students in 2018.

Spearheaded by the French Ministry of Europe and Foreign Affairs in 2015 and led by renowned French chef Alain Ducasse, Good France (Goût de France in French) is an annual opportunity for the world to celebrate the best of French cuisine on March 21st.

To celebrate this event, we are inviting culinary students in top colleges in France and Ireland to create a three-course menu celebrating Irish and/or French dairy produce. Each dish created must include dairy as the main ingredient. A shortlist of between 3 and 5 French finalists and the same number of Irish finalists will then participate in a Cook Off in Dublin at the DIT, on Cathal Brugha Street, where they will be given a mystery basket of ingredients to cook from.

The winning team from France will receive a weekend of travel to experience Ireland’s gastronomic culture whilst the Irish finalists will have the chance to visit one of France’s top gastronomic regions and explore that culture.

French Ambassador to Ireland, Stephane Crouzat said “As part of the March 2018 France-Ireland Gastronomy Month and France’s global Good France initiative for gastronomy, this culinary competition is a unique opportunity for French and Irish students to showcase their talents in front of a jury of their peers. Our two countries share a passion for good food and quality produce and I invite all members of the France-Ireland network for Culinary Arts, Hospitality and Tourism as well as any culinary arts student interested to take part in this challenge and create a unique Franco-Irish menu celebrating the best of our gastronomies.”

The judging panel for the competition will include Stephane Crouzat. H.E Ambassador of France to Ireland, Chef Ross Lewis of Chapter One, Patrick Guilbaud of Restaurant Patrick Guilbaud and Cathy Curran of the National Dairy Council.

Head of School of Culinary Arts and Food Technology, DIT, Dr Frank Cullen said “This type of culinary competition with the integration of Irish and French students’ working together to produce a meal using a mystery basket is long overdue. The competition provides an excellent platform for culinary students in Ireland and France to demonstrate their skills, knowledge and culinary flair to two of the restaurants industry’s most highly regarded professional chefs. This would not have been possible without the support of the Irish and French Dairy Councils. “

This contest is open to all students in full time culinary education in participating higher in France and Ireland who are 18+ years at the beginning of the competition and wish to participate in the recipe contest. All finalists must be available to attend and present at the Cook Off event at DIT in Dublin on Wednesday 21st March 2018. (all travel and accommodation costs are covered by the organisers)

Zoe Kavanagh, CEO of the National Dairy Council said “We are really excited to be involved in this competition with our colleagues in France and to celebrate the taste and diversity of dairy produce. Both Ireland and France have an excellent reputation of high quality dairy production. The best dishes are made from fresh ingredients and dairy is delicious, nutritious and versatile”

The closing dates for all entries is 9th February 2018 with the announcement of the finalists by 14/15 February 2018. There will be a separate jury in France to shortlist the French culinary student finalists. All finalists will be invited to send a 1-3-minute video presenting their menu to the judges. Each finalist team will then attend the full day Cook Off in DIT, Cathal Brugha Street in Dublin on Good France Day – 21st March 2018.

For further information on entering and details please visit https://ie.ambafrance.org/

Contact details for the Embassy of France in Ireland: Mr Guillaume Ravier – academic@ambafrance-ie.org or 01 277 5056

Inspired by Auguste Escoffier, who launched the “Dîners d’Épicure” (Epicurean Dinners) initiative from 1912, Goût de France / Good France encourages chefs from around the world and embassies to serve French-style dinners on the same day in various world cities. On 21 March, France is on the menu! This international event, which was first held in 2015, follows UNESCO’s decision to put the “gastronomic meal of the French” on the intangible cultural heritage list. Thus on 21 March every year, participating restaurants offer guests the experience of French art de vivre and pay tribute to its capacity for innovation and the values that it represents: sharing, pleasure, and respect for good food, good company and the planet. In 2017, over 2,100 participating restaurants in 150 countries, 250,000 meals and 8,000 guests in 156 embassies. Vitality, modernity, responsibility: gastronomy will be used to showcase France’s positive values, with the warmth associated with the pleasures of good food.